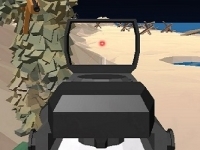 Are you ready for a great realistic gun game ? You can play against real players and also bots , you have 24 guns to finish level gungame, will have options to play also with few mode like wave survival, free for all, team vs team, you as zombie against other players also dont forget for offline mode with 40 levels to finish. Enjoy and play every day to support my next game im working . Beach Assault GunGame Survival is a terrific game which you can play for free in in 4friv.com. With Beach Assault GunGame Survival game, we supply many cool Friv 4 games to play at no cost.

Use Left Mouse button to Play