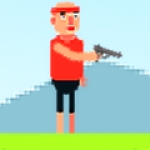 Do you ready to battle against your friend on a platform? This war is going to be between two game characters which movements are little bit weird. The thing what you need to do, is to unbalance your opponent and fall himu002Fher from the platform. You can have the advantage by collecting bonuses around you. The player who pushes his opponent from the platform and falls for five times, wins the game. Balance Wars is a terrific game which you can play for free in in 4friv.com. With Balance Wars game, we supply many cool Friv 4 games to play at no cost.

Use Left Mouse button to Play