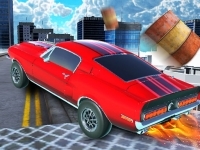 What about racing on the peerless stunt roads in the sky between the skyscrapers? You should complete tough six quest with seven spectacular cars. Each level has its different road. In some of the levels you will fly throw the ramps and in some of them you are going to smash the bricks! You can play the game either single or two player. Besides, you can drive your car freely in Free Ride game mode and you can try various stunts. In this area you can discover some Easter eggs too. Play City Car Stunt online at 4friv.com. You can play it in fullscreen to have fun with it. City Car Stunt is a great Friv 4 game to play with no cost.

Use Arrow keys And WASD button to Drive and Brake,